SZSE to Take on the Responsibility to Take Bigger, Bolder Steps as a Trailblazer in the Capital Market——The CPC SZSE Committee Organizes Officials and Employees to Study the Guiding Principles of General Secretary Xi Jinping’s Important Speech at the Celebration of the 40th Anniversary of the Establishment of the Shenzhen Special Economic Zone 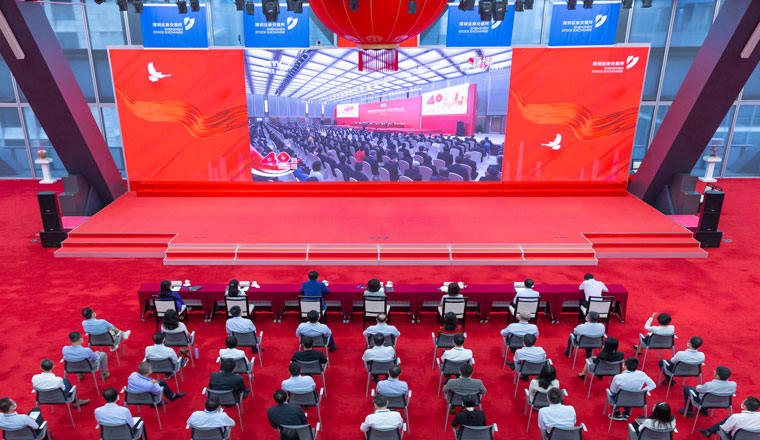 On October 14, The CPC SZSE Committee organized all officers and employees to watch the live streaming video of the celebration of the 40th anniversary of the establishment of the Shenzhen Special Economic Zone (Shenzhen), earnestly studied the guiding principles of General Secretary Xi Jinping’s important speech at the celebration and the tasks and requirements for the Plan on Implementing Pilot Comprehensive Reforms to Build Shenzhen into a Pioneering Demonstration Area of Socialism with Chinese Characteristics (2020-2025), and make plans for reform and development for SZSE.

SZSE officers and employees agreed that in the key speech, General Secretary Xi Jinping thoroughly reviewed the remarkable achievements and valuable experience of Shenzhen since its establishment, and fully affirmed the important contributions that Shenzhen has made to China’s reform and opening up and socialist modernization. He solemnly declared the unwavering resolve to deepen the reform and opening up and make Shenzhen even better, and raised clear requirements and made important arrangements for Shenzhen in the New Era. His speech is forward-looking, informative, encouraging and of great instructive and practical significance. SZSE will earnestly study and grasp the guiding principles of General Secretary Xi Jinping’s important speech, and further strengthen political stance. SZSE will strengthen the consciousness of the need to maintain political integrity, think in big-picture terms, follow the leadership core, and keep in alignment with the central Party leadership; stay confident in the path, theory, system, and culture of socialism with Chinese characteristics; and uphold General Secretary Xi Jinping’s core position on the Party Central Committee and in the Party as a whole, and uphold the Party Central Committee’s authority and its centralized, unified leadership. SZSE will align thought and action with the guiding principles of General Secretary Xi Jinping’s important speech and major decisions and arrangements of the CPC Central Committee and the State Council, and advance the work concerning the reform and development of SZSE with high quality.

This year marks the 40th anniversary of the establishment of the Shenzhen Special Economic Zone and the 30th anniversary of the founding of the capital market and SZSE. As a vivid miniature of the reform and opening up of the Shenzhen, SZSE has developed from scratch, from a small institution and single market to a large and multi-tiered market and from a regional market to a global emerging market. Upholding the pioneering Shenzhen spirit to be the first and diligent, SZSE has held high the banner of reform and innovation, and become the first to found and open business. SZSE has explored and launched the SME Board and the ChiNext Board, steadily initiated the Shenzhen-Hong Kong Stock Connect, and successfully implemented the reform of the ChiNext Board and the pilot project of the registration-based IPO system, which have given strong support to tech firms, growing and innovative startups and enterprises, small- and medium-sized enterprises and private companies. Committed to serving the reforms of state-owned assets and state-owned enterprises and innovation of investment and financing systems and mechanisms, SZSE pursues reform-based development and innovation-driven breakthroughs, in a bid to serve national economic and social development.

Next, SZSE will fully implement the guiding principles of General Secretary Xi Jinping’s important speech, continue to draw on the valuable experience in the development of Shenzhen, and unswervingly apply the new development philosophy. We will closely follow the path of promoting high-quality development and building a new development landscape, practice the principles of “systems building, non-intervention, and zero tolerance” and the “urges to revere the market, revere the rule of law, hold high professionalism, stay alert to risks, and obtain support from various parties”, and always maintain the pioneering spirit of making innovations and working hard, to fulfill new responsibilities, and make new accomplishments and contributions. First, we will unwaveringly follow and strengthen the Party’s leadership. we will carry out in depth the general requirements on Party building in the New Era, further strengthen the Party’s overall leadership of SZSE, continue to enhance Party building to provide strong political guarantee for the business development of SZSE. Second, we will keep up with the times, emancipate our mind and respect excellent traditions while making innovations. Besides, we will cherish hard-earned significant opportunities, take on the important mission of serving innovation-driven development, and implement the development concept of building a pioneering demonstration area and the requirements of the pilot project in every aspect of work, through eliminating development bottlenecks, gathering development advantages, and enhancing development drivers. Third, we will continue to deepen reform and expand opening up. Building on the reform of the ChiNext Board and the pilot project of the registration-based IPO system, we will advance in depth the key task of deepening the reform of the capital market on all sides and the list of first batch of authorized items for the pioneering demonstration area, actively serve the development of the Guangdong-Hong Kong-Macao Greater Bay Area, and facilitate high-level circulation of technology, capital and the real economy. In addition, we will learn from best practices overseas, advance the building of a system of regulations and rules that is in line with international standards, and further enhance competitiveness, open regulation capability and risk control capability. Fourth, we will go all out to build a high-quality innovation capital center and world-class exchange. Centering on the outline of the “14th Five-year Plan” and the arrangements on deepening the reform of the capital market on all sides, SZSE will refine and carry out the strategic development plan of SZSE, strive to build a capital market ecosystem that matches the pioneering demonstration area, and help build Shenzhen into a model city of a great modern socialist country, and actively make contributions to build a modern socialist country in all respects and achieve the Two Centenary Goals.

PREV 2020-10-16
SZSE and CR Sign a Strategic Cooperation Framework Agreement to Jointly Build a Model of Innovation of Investment and Financing System for the Guangdong-Hong Kong-Macao Greater Bay Area and the Shenzhen Pilot Demonstration Area of Socialism with Chinese Characteristics
NEXT 2020-10-16
SZSE Launches CNI Blue 100 Index to Assist High-quality Development of Maritime Economy
PRINT CLOSE
SZSE will fully implement the guiding principles of General Secretary Xi Jinping’s important speech, continue to draw on the valuable experience in the development of Shenzhen, and unswervingly apply the new development philosophy.