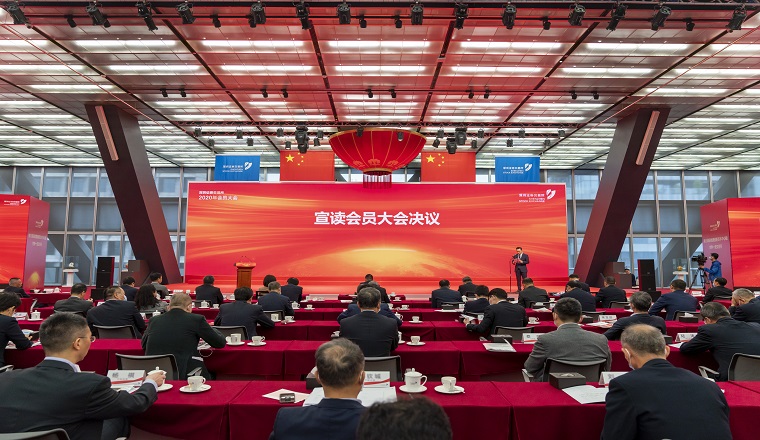 On 14 November 2020, SZSE held the Members’ General Assembly. The meeting was convened by the Board of Directors and was hosted by Chairman Wang Jianjun. 119 members’ representatives attended the meeting.

The General Assembly strictly implemented the Measures on Administration of Securities Exchanges and the Charter of Shenzhen Stock Exchange, conscientiously put in place pandemic prevention and control requirements, and made arrangements and adequate preparations centering on the topic of “working together to build a quality innovation capital center and world-class exchange”. Held with solemnity and thrift in a practical and efficient way, the General Assembly further enhanced and refined the mechanism for regular holding of members’ general assembly, safeguarded members’ rights to know, participate and supervise, and strengthened the synergy between SZSE and its members. Members paid great attention, carefully deliberated on relevant topics, prudently excised voting rights, seriously supervised counting of votes and actively put forward suggestions, ensuring the General Assembly was held with high quality.

The General Assembly reviewed and adopted the Report on the Work of the 4th Board of Directors of SZSE. The General Assembly fully affirmed the work of the 4th Board of Directors, saying that the 4th Board of Directors has fulfilled its duties, lived up to its responsibilities, given full play to its decision-making function and driven the SZSE market to break new ground, and that as a result, the market functions have improved, the market has entered into a new development stage, and remarkable achievements have been made in various aspects. The General Assembly put forward that the new Board of Directors should continue to follow Xi Jinping Thought on Socialism with Chinese Characteristics for a New Era as the guidance, carry out in depth the guiding principles of the Fifth Plenary Session of the 19th CPC Central Committee, and actively practice the principles of “system building, non-intervention, and zero tolerance”. Under the leadership of China Securities Regulatory Commission (CSRC) and according to the working requirements of standing in awe of the market, rule of law, professionalism and risks and pooling the efforts of all sides for the capital market’s development, the new Board should resolutely take on the responsibility as a trailblazer in the capital market, unite members, and gather the wisdom of the industry. It should unswervingly deepen reform and expand opening-up, and accomplish with high quality General Secretary Xi Jinping’s important instructions and guidelines for the capital market and important decisions and plans of the CPC Central Committee and the State Council with the trailblazer’s spirit and standard. The new Board should intensify formulation of basic systems, conscientiously implement the three principles of the registration-based IPO system reform, and take solid steps to make preparations for the implementation of the registration-based IPO system across the market. It should also strictly guard market access and exit, facilitate improvement of quality of listed companies, forestall and defuse risks in key fields, give full support to SZSE’s building of a quality innovation capital center and world-class exchange, and strive to create a standard, transparent, open, dynamic, and resilient capital market.

The General Assembly reviewed and adopted the Report on the Work of General Manager of SZSE. The General Assembly fully affirmed the work of the management of SZSE, saying that the management earnestly carried out the resolutions of the Members’ General Assembly, faithfully fulfilled its daily operation management responsibilities, and obtained positive results in executing reform tasks, serving the development of the Guangdong-Hong Kong-Macao Greater Bay Area and the pilot demonstration zone of socialism with Chinese characteristics, improving market functions, strengthening frontline regulation, forestalling and defusing risks, etc., especially in promoting smooth implementation and stable operation of the reform of the ChiNext Board and the registration-based IPO system. The General Assembly required the management of SZSE consciously align thought and action with the guiding principles of the Fifth Plenary Session of the 19th CPC Central Committee, and put stability in the first place and seek progress while maintaining stability. The management should focus on reform, optimize services, enhance regulation and prevent risks. It should build an inclusive, efficient innovation-driven market system, a high-level innovation capital circulation mechanism, a global asset allocation platform with an innovative market’s characteristics, institutional and systematic high-level two-way opening-up, precise and efficient regulation and risk control systems, a world-leading digital system, and a scientific, efficient governance system. It should strive to build a quality innovation capital center and world-class exchange, give full play to the role of the capital market as a hub, and assist in establishing systems and mechanisms that effectively support the real economy.

The General Assembly reviewed and adopted the Charter of Shenzhen Stock Exchange (2020 Revised Draft). The General Assembly believed that the Charter is a fundamental and guiding document for the governance of SZSE. While revising the charter, we have complied with relevant provisions of the new Securities Law and the Measures on Administration of Securities Exchanges, refined the scope of functions of SZSE, optimized the internal governance mechanism of SZSE, better adapted it to the governance and operation practices of SZSE and further enhanced the institutional basis for frontline regulation. The General Assembly required that the Charter (Revised Draft) should be reported to the CSRC for approval according to relevant provisions and that SZSE should make proper arrangements to shift from old rules to new ones.

The General Assembly reviewed and adopted the 2019 Final Accounts and 2020 Financial Budget of SZSE. The General Assembly believed that the reports objectively reflected SZSE’s financial position and operating results in 2019, and that SZSE formulated the 2019 profit distribution plan in a scientific manner based on market trends and business development needs, and reasonably estimated the financial revenues and expenditures for 2020. The General Assembly required SZSE to report the Final Accounts and Financial Budget to the CSRC according to regulations and to continue to enhance financial management.

The General Assembly elected members of the 5th Board of Directors and the 3rd Board of Supervisors.

The 5th Board of Directors consists of eight members, namely, (order by pinyin, similarly hereinafter):

The 3rd Board of Supervisors has three members, namely,

The General Assembly called on SZSE, standing at the historical intersection of achieving the Two Centenary Goals (to complete the building of a moderately prosperous society in all respects by the centenary of the Communist Party of China in 2021 and to build China into a great modern socialist country that is prosperous, strong, democratic, culturally advanced, harmonious, and beautiful by the centenary of the People’s Republic of China in 2049), to continue to unify, support and serve members, and pool efforts of all sides and work hard to open up a new prospect featuring joint contribution and shared benefits. SZSE will join hands with all sides to build itself into a quality innovation capital and world-class exchange, properly implement the development requirements of the 14th Five-year Plan, and make contributions to build China into a modern socialist country in all respects and achieve the second Centenary Goal.