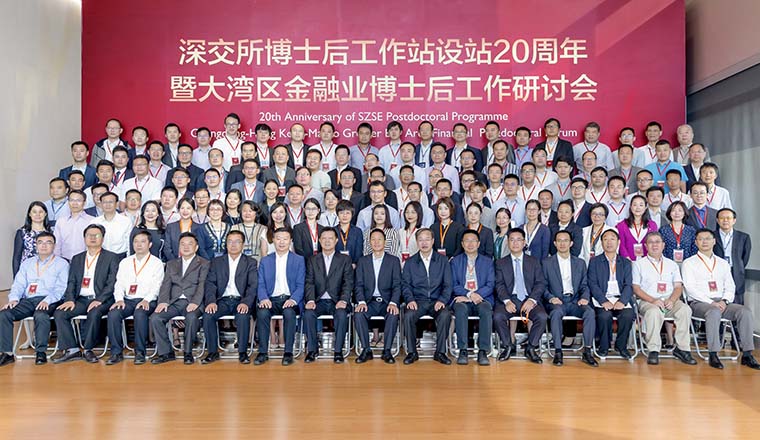 2019 is the 20th anniversary of the establishment of SZSE Post-Doctoral Research Center (the "Center"). With the tenet of serving real economy and overall state strategies and the mission of promoting enterprise-university-research integration and cultivating high-caliber talents commensurate with China's capital market development, the Center, as the first post-doctoral research center in China's securities industry, has continuously provided intelligent support for capital market reform and development and the strategic planning of SZSE, fostered a batch of high-caliber talents for the Chinese securities industry and strongly supported the development of multi-layered capital market of China.

On November 8, the seminar on the 20th anniversary of the establishment of the Center and the post-doctoral work for the financial industry of Guangdong-Hong Kong-Macao Greater Bay Area was held in Shenzhen. Head of Department of Professional and Technical Personnel Management of Ministry of Human Resources and Social Security of the People's Republic of China Yu Jiadong, SZSE President & CEO Wang Jianjun and relevant officials from Guangdong Provincial Department of Human Resources and Social Security and Shenzhen Municipal Bureau of Human Resources and Social Security delivered speeches. SZSE Chairman of Supervisory Board attended the seminar. Experts, scholars and postdoctoral researchers from universities and scientific research institutes (such as Chinese Academy of Social Sciences, Xiamen University, Southern University of Science and Technology, Chinese University of Hong Kong and University of Macau) and organizations (such as Shenzhen Municipal Financial Regulatory Bureau, China Institute of Finance and Capital Markets, SSE, China Financial Futures Exchange, China Merchants Bank, Shenwan Hongyuan and Shenzhen Capital Group) discussed post-doctor cultivation, capital market reform, the Greater Bay Area building and other issues.

In the past 20 years, the Center continuously innovated cultivation models, gradually explored an effective operation management mechanism, and established a sound multi-dimensional mentor system, high-caliber talent cultivation mechanism, innovative subject research mechanism and two-way selection mechanism for talents. The Center has completed nearly 1,000 influential, basic, strategic and foresighted subject researches. The research results provided reference for senior management to make decisions, some of which have been converted into laws and regulations, some have become market supervision practice and some have been published on important academic journals. They attracted widespread attention in the industry. The Center has recruited 190 post-doctors in 20 batches, of whom 169 have passed evaluation and graduated from the center. They are at the frontline of market regulation, policy research and social undertaking. The Center has the largest number of entrants and graduates in China's financial and securities industry. It is awarded the title of "National Civilized Youth Models" by the former Central Financial Working Commission and "National Excellent Post-Doctoral Scientific Research Center" by the Ministry of Human Resources and Social Security and the Office of China Postdoctoral Council.

Parties present at the seminar fully affirmed the achievements made by the Center, and also raised higher expectations. After nearly 30 years of development, the capital market has made a series of significant achievements. However, it also faces a new round of reform, innovation and development challenges. It is imperative to further overcome reform difficulties, perfect basic rules for the capital market, strengthen top-level design and intellectual support, and provide better service for real economy. Participants believed that the task of capital market reform is significant, which tests not only the wisdom and courage of reformers but also the accumulation and ability of researchers. Therefore, the Center should foster capital market "specialists" and high-caliber talents with innovation spirit and capacity, constantly perfect rules and measures, step up efforts in basic research, result application, and talented personnel mobility and academic innovation, actively push forward scientific result application in capital market reform and better serve the real economy.

The Center will forge ahead to fulfill the mission. Since the beginning of this year, the Central Committee and State Council have issued the Outline of Guangdong-Hong Kong-Macao Greater Bay Area Development Plan, Opinions on Supporting the Building of Shenzhen into the Pilot Demonstration Area of Socialism with Chinese Characteristics and other documents, defining the direction for SZSE's reform and development. SZSE will conscientiously carry out the guiding principles of important instructions made by General Secretary Xi Jinping regarding capital market. According to CSRC's requirements of “the four awes (stand in awe of the market, rule of law, professionalism and risks) and one joint force (The capital market’s development needs all the efforts made by all sides)”, it will explore innovative talent work ideas, give full play to the high-caliber talent advantage of the post-doctoral system and continuously inject new impetus into the capital market for its healthy and stable development. Meanwhile, it will strengthen research into important subjects on capital market, and support the comprehensive reform deepening of capital market and the construction of the Greater Bay Area and pilot demonstration area of socialism with Chinese characteristics through thorough research, service and implementation of key reform tasks, thereby boosting the high-quality development of the economy.